It lacks a certain date for the origins of the Palio, as in the rest there is no precise news for the foundation of the city, which in the myth begins with a “Palio”, ran by the children of Remo, Senio andAschio, the people who reached the city after the escape from Rome.

It is certain that the Palio is ancient as Siena, and its history is always intertwined with that of the city. In the golden age of the Siena’s Republic – 150 years between the beginning of the XIIIand the middle of the XIV century – the Palio was the solemn and conclusive moment to celebrate the assumption in the feasts of mid-August. 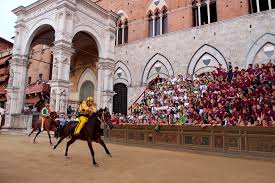