Pienza is known as the ideal city ‘ of the Renaissance, creation of the great humanist Enea Silvio Piccolomini, then became Pope Pius II. He planned to transform his hometown into an ideal Renaissance city. The architect Bernardo Rossellino was commissioned to build a cathedral, a papal palace and a municipal palace; the works finished in three years (1459-1462). Most of the important historical and artistic patrimony of Pienza is concentrated in the suggestive square dedicated to Pope Pius II. Today there are many palaces of the V century along Rosselli Main Street and Pius II Square (the heart of the village) on which overlook the Cathedral, the Piccolomini Palace and the Municipal Palace.

Pienza is today concretely one of the constructive modalities through which in the Renaissance era looked for create a model of life and an ‘ideal’ government on Earth, elaborating an idea of cities that could give concrete answers to the desire for peaceful and industrious civil coexistence of men.

The city today is part of a territorial system called “Cultural, Natural and Artistic Park of Val D’orcia”, which aims to conservation of extraordinary artistic patrimony of the five municipalities that are part of it: Castiglion d’Orcia, Montalcino, Pienza, Radicofani and San Quirico d’Orcia.

Peculiar feature, finally, is the place names. In fact the main street is Corso Rosselli and brings the name of the great architect-town planner, parallel to the main street is Toll’s Street, very romantic for its narrow and shady side roads, as a Love’s Street, Luck’s Street, Kiss’ Street and Dark’s Street. 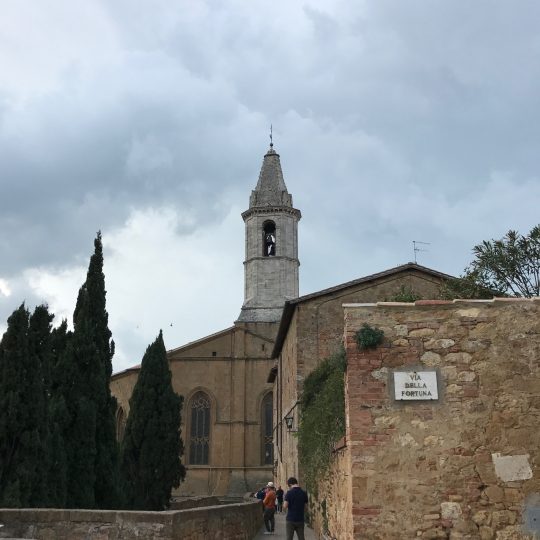 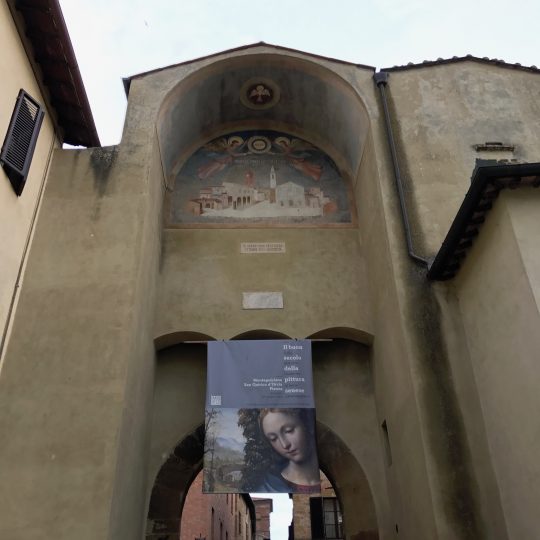 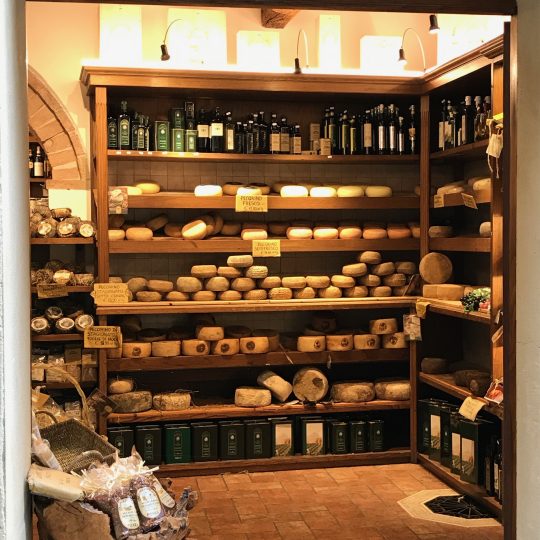 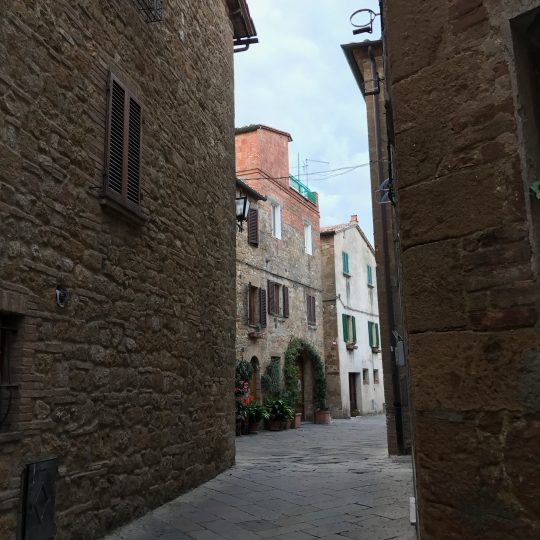 The Cathedral, dedicated to the Madonna of the Assumption, is one of the most important monuments of the Italian Renaissance. However, there are some typical elements of the French Gothic style, such as the two-sloping roof, the windows and the central rose window. The front is tripartite in travertine and four pilasters corresponding to the inside aisles, it is divided into two zones, the lower one where are the three entrance doors and the upper one with three big arches supported by columns. On the gable of the front dominates the coat of arms with the emblem of the Holy Centre of Pius II.

The Palazzo Piccolomini in Pienza

The palace, adjacent to the Cathedral, was the residence of the descendants of Pius II until 1968, it is a square plan, developed on three floors, made of live stone finely worked in a light, from the bottom to the top. The apartments open to the public include the bedroom and the library of Pius II. Inside the building there is a courtyard adorned with columns that introduces a loggia that overlooking an Italian garden; from here you have a spectacular view of the Val d’Orcia and the wooded slopes of Mount Amiata.

The main square also overlooks the Town Hall, office of the municipality. It is characterized by a portico with three arches that rest on Ionic columns. The front, all in travertine, is open superiorly by four mullioned windows and presents a clock tower built in terracotta. Inside the portico, the front is adorned with graffiti and stone coat of arms  of the various mayors who dwelt there, as well as those of Pius II. Inside the palace, in the Hall of the Council, there is a fresco of the School of Siena of the 400 that represent the Madonna and Child and the Patrons of Pienza (Saint Vito, Saint Modesto and Saint Matteo).

This Romanesque church of the eleventh century, just outside the historical center of Pienza, is important because Pope Pius II was baptized there. Beautiful is the cylindrical tower and the portal decorated with mythological and fantastic themes. 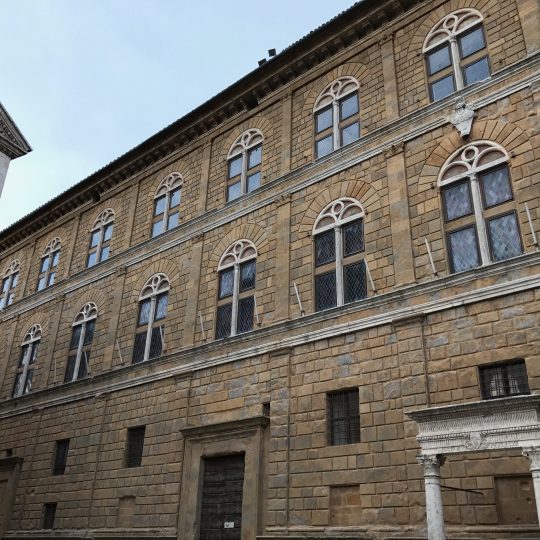 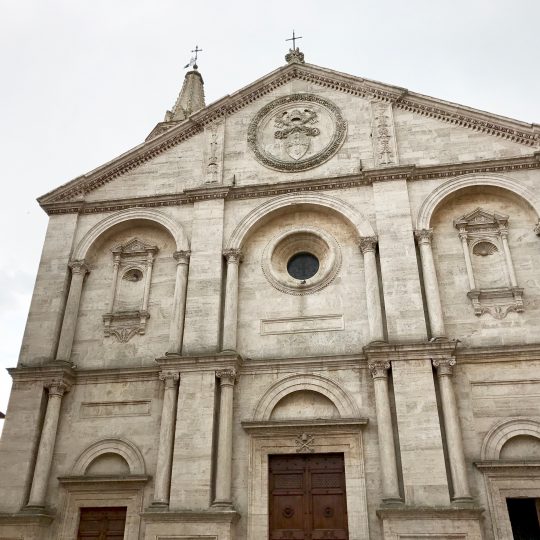 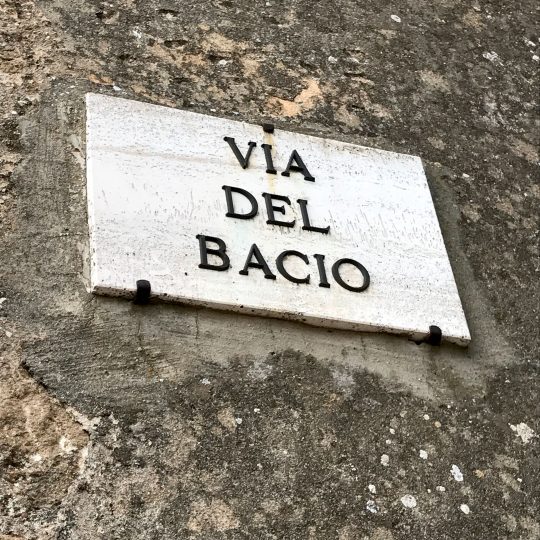 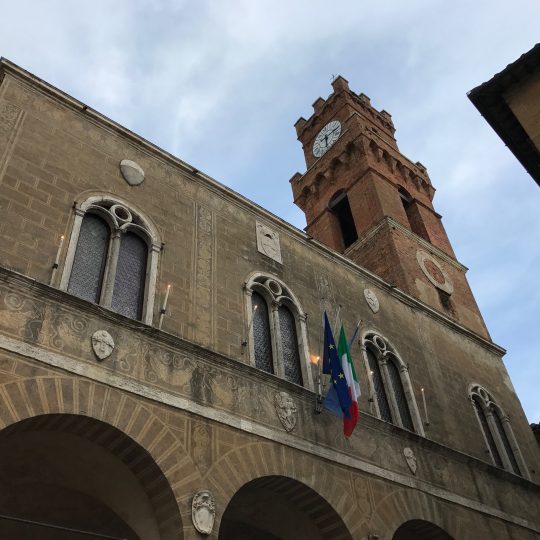